Sora (Standard Gaian: そら, "Sky") is the capital of Western Province. Situated on the southwestern coastline of Gaia, Sora is one of the oldest cities in the country. It was named "Sora" due to the proximity to the sites in which the colonial ships descended from the sky.

Known for its beauty, the city hosts dozens of parks in and around its core and is nicknamed "The City of Parks". Located at the very center of Sora are the historic administrative buildings, which functioned as the country's parliament during the Colonial Era. Today, they function as the legislative buildings of the Western Province, and are known as the Regional Assembly Buildings. The city is also home to the Imperial Family's summer palace, which is located just north of the city on a sprawling estate.

Ranked as one of the most livable cities in the country and the world. The city has an extensive transportation system, ranging from its elevated rail lines to its bus system. A comprehensive network of bike roadways also services the city, the greenbelt and the suburbs. Sora International Airport services the Sora Metropolitan Area and is home to Sora Airways. The city is also home to the Hiroko Koizumi Natural History Museum which is named after Dr. Hiroko Koizumi, the lead scientist for the Gaian Colonial Authority during the Colonial Era. The museum is situated on the grounds of the University of Sora, which is a world leader in green technologies.

Little is known about the site of the city prior to the establishment of the settlement that would become Sora. Archaeological digs and research have suggested that the region in which Sora is located, has been uninhabited prior to Gaian colonization efforts in the area.

The first Gaian colonists explored the region as early as the 2790's, having approached Umi Bay from the west. Further exploration and colonization efforts were conducted by the Gaian Colonial Authority from 2800 and onwards. By 2810, the first permanent settlements were establish in the present-day Sora Prefecture. As a result of the proximity of the settlements to the colonist landing zones, the settlements grew rapidly in size and were officially amalgamated into the city of Sora on March 6, 2862. The new city became known as Sora (Standard Gaian: そら, "Sky"), due to its proximity to the sites where colonial ships descended from the sky.

From 2862 onwards, the city became literally one big construction site, as the Colonial Authority began the process of establishing the colonial capital in Sora. In 2870, construction began on the two large arcologies at the centre of Sora, which became known as "The Crescents" due their shape. The Crescents housed the country's parliament and many government apparatuses until the capital was moved to the newly built Celestial City in 3024.

Sora's green oriented city planning and design was decided early on in the city's history, but it began to take shape earnestly beginning in the 2900's. A majority of the city's greenbelts around the downtown core were built during 2900's, as were the initial lines of the city's rapid transit system. Sora became known as a home for the biotechnology and environmental industries since the beginning of the 31st Century, as many city policies began favouring sustainable development.

Sora is located on the shores of the Inland Sea, in the southwestern part of Western Province. The city occupies a relatively small area, and is one of the most densely populated cities in the country. The city was named "Sora", which means "sky", due to its proximity to the sites where the colony ships descended from the sky.

The city is dotted with many parks and green spaces, as a result, it is known as the "City of Parks". Sakura Park is a well known urban park in Sora. Located north of the city's downtown core, the park is part of a series greenbelts that divide the city into its relative wards and districts. The city is surrounded by sizable lakes to the north, west, and the east. The Inland Sea borders the city to the south, and is a prominent geographical landmark, as is Umi Bay to the southwest of the city.

Sora's cityscape has been largely influenced by the collective desire of the city's population to expand the city in a sustainable and architecturally pleasing way. As a result, the city is one of the country's most livable cities. Today, many skyscrapers and condos fill the city's skyline and remain a defining feature of the city. 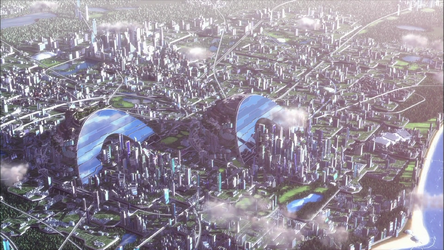 An aerial shot of downtown Sora 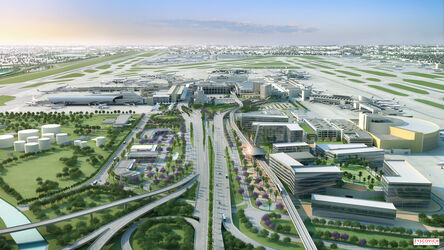 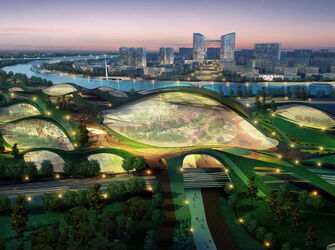 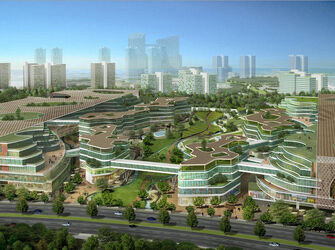 Sora has one of Gaia's mildest climates. Summers are generally cool, rarely going above 30°C. The summer months are also typically dry, with few days having precipitation. Winters are generally mild, with snowfall being uncommon. Winter temperatures in Sora rarely drop below -10°C.

As a result of its mild climate, Sora has one of the longest growing sessions in the country.

Sora is known as the most environmentally friendly city in Gaia, which largely stems from its long history of green policies and developments. As a result, the city is home to numerous greenbelts and parks, earning the city the nickname "City of Parks".

Like Celestial City, Sora is a special metropolis. It is one of two cities in the country that are governed by a Governor-Viceroy, appointed by the reigning monarch. The city gained special metropolis status due to its historical and political importance.

The city's day to day administrative duties are under the purview of the Sora Metropolitan Council, which is comprised of sixteen city councillors. Elections for councillors are held approximately every five years, as are the mayoral elections. As in Celestial City, the Governor-Viceroy in Sora holds more power than the elected mayor. Mayors are responsible for representing the collective will of the citizens of the city, using the ability to compose bylaws that reflect that. The Governor-Viceroy, who is appointed by the reigning monarch and is usually a member of the Imperial Family, has the responsibility of approving bylaws and projects within the city.

Historically, Sora has been a stronghold for the Green Party, in both national and provincial elections. This is even reflected in the city's municipal elections and the city bylaws and policies.

Sora has one of the most prosperous economies in the region, due to its proximity to other major cities and its well developed economic infrastructure. Major economic sectors in Sora include trade, biotechnology, natural resources, software, and tourism.

As a result of Sora's scenic location and breathtaking cityscape, the city is a major tourist destination. Many visit the city to see the numerous gardens and parks that are present throughout the city, and the sea and forests that surround the city. Sora's long history of green city policies have made the city one of the most beautiful in country, if not the world. Tourists have the ability to bike throughout the city, as a result of green policies that have set up numerous greenbelts that crisscross the city. Tourism is expected to increase as the city moves forward with its "Towards the Sky, Towards Sora" promotion campaign.

The rapid development of condos and skyscrapers within Downtown Sora have been a source of economic prosperity in the city, for decades. The housing market in Sora is one of the most active, with some homes selling within hours. Development has been most prevalent along the city's greenbelts and SkyTrain lines.

Public transportation is the responsibility of Sora Area Transport Authority. SATA provides bus services, tram service, and an automated rapid transit system known as the SkyTrain. The SkyTrain system current has dozens of lines crisscrossing the city and is currently being expanded as demand increases.

Sora International Airport serves as Sora's primary port of entry. The airport is one of the country's busiest, in terms of domestic and international passengers and cargo. Sora Airways operates a major domestic hub at the airport. Many of the country's major airlines are serve the airport, such as Gaia Airlines and GoCoral Airlines. Recent infrastructure projects resulted in the airport being linked to the SkyTrain system by the Gaia Line. Meaning travel to and from the airport has become much easier.

The provincial government is currently investing in several infrastructure projects in and around the Sora Prefecture. Notable projects include the expansion and upgrading of the Sora portion of the maglev line to Celestial City, and the expansion of the SkyTrain system.

Sora is home to some of the country's most well funded schools. The Sora Prefectural Government is responsible for the education system in the city. They maintain hundreds of public schools within the prefecture, and fund dozens of education institutions.

Sora is known as a major centre for environmental research and education. Many of the country's environmental and medical research institutions are located in the city. Most of which are located at the University of Sora, which is also home to the Hiroko Koizumi Natural History Museum.

As the former colonial capital of Gaia, Sora has a diverse and vibrant culture. Many of the city's historical colonial architecture still exists, such as the two massive regional administrative buildings that are known as "The Crescents" by locals and many of the biofarms left behind during the rule of the Gaian Colonial Authority.

The city is known throughout the country for hosting numerous festivals and festivals that are large enough to rival those in Celestial City. The city also hosts the country's largest Night of the Stars festival. It has been tradition for the "City of Parks" to host the largest festivities of the Night of the Stars, due to the overabundance of parks and the city's historical significance. Festivities usually kick off the night before, with large fairs being set up in most parks. Restaurants in the city are jam packed during these festivals, as it is a traditional for families to gather for a meal. The most notable part of the Night of the Stars festivities in Sora, is the largest simultaneous releasing of lanterns into the night sky. The Sora Cherry Blossom Festival is a notable local festival. The festival begins in early spring, with the blossoming of the cities numerous cherry blossom trees, most notably in Sakura Park. Additional festivals that occur in Sora include the Sora Sailing Competition which takes place in the picturesque Umi Bay and the Inland Sea. Umi Bay is also home to the "Sceptre of Gaia", a large monument built to celebrate Gaia's bicentennial. The monument is known for its daily light shows, which lights up the sky above Umi Bay.

Sora current has one sister city. In an effort to promote environmentally friendly policies and sustainability, Sora's criteria for relationships with other cities are more strict, compared to other Gaian cities. Through its sister cities program, Sora hopes to promote the city with other like minded cities.