Over the course of years, New Archosaur has seen the greatest and poorest moments in history. The most famous moments was the Dark Ages, which lasted from 1492-1701. It was claimed to be the longest depression in recorded history, even longer than the Great Depression in 1922.

Early Iron Age findings can be dated back to 6000BC, where Nymphs settled within the city, and started to craft tools there even before the man created Iron. Before it was conquered, it was known as Tallahassee, and was considered a very small village under a small council. It housed no more than 45 people, due to the population of the time being so small in the village. The council managed to make the village thrive with it's bright ideas, and great thinkers whom are still told about even today.

During the 200BC's, Tallahassee already invented many technologies, such as the musket, the earliest forms of guns within New Archosaur. Learning how to use gunpowder at an extremely early age, Tallahassian people are considered the most intelligent ethnicity on the planet.

In 172BC, an explorer from the north had visited the village and explored it. He then asked the chief of what is here in this village, and thus, gathered enough information to present it to his lord, Salamis of Archosaur, who would march his army outwards under the order of his father, Duke Blacke of Archosaur to gain more territory for the Kingdom. Since the population of Tallahassee consist of mostly women, his knight, Sir Braven, has suggested for Salamis to take them into slavery as women were objects back at where he lived. Salamis, initially, refusing his knight's offer, was nearly killed, but the almost enslaved women saved him. Salamis's famous words were this:

- Salamis the Soldgent from chapter 13 of the novel Immortal Kingdom.

The speech had the entire village surrender without a fight, and Salamis was titled "The Soldgent" (Soldgent means "Legend" in Tallahassian) due to his noble efforts and benevolent leadership.

In 180BC, Salamis has liberated the country from it's mother country due to high taxes and other sorts of burdens and became it's Emperor.. Since then, the country has a long history of being one of the world's largest empires during it's time. Salamis had died of assassination in 1412, and his nymphian General, Menganis Powarty, rised to the throne since she was married to the new Emperor. In 1492, Menganis has mysteriously disappeared, though some say that she died in 1501. Her remains are still unknown to this day.

After Menganis Powarty has disappeared, a series of weak rulers and tyrants had dragged down New Archosaur. These days were called the "Dark Ages". Unemployment was close to about 64.6%, the primary resource of New Archosaur, Grain was barely planted due to the least amount of pay the farmers were recieving. Prostitution, enslavement and sex trading became legalized due to the least amount of money that everyone was getting. Even the rich had to do labor work inorder to keep their homes and keep the revenue of the economy and money going.

In 1677, about 40,000 people died of starvation on the streets and close to about 300 buildings were destroyed due to bad conditions. The city was unregonizeable, and the palace with the leaders and ministers were the only rich, well maintained and happy in the entire empire.

On the day of May 1st, 1701, a young girl by the name of Valencia Duller Ishtamari I (aged 8) had assassinated the last Emperor of the Dark Ages, Ganderoth III the Terrible. After his death, Valencia had her famous speech infront of the palace.

The speech was more respected than Salamis' original speech of when he had founded Tallahassee over a thousand years ago. Being the youngest to ever assend to the throne, Valencia was respected to be one of the world's greatest leaders despite her extremely young age. Her intelligence, bravery, ambition and her love and care for her soldiers and the people had extended throughout the continent. During the Valencian Era, new technologies were researched, the armed forces had tremendously increased, and the borders had expanded to nearly the entire continent under her leadership.

Valencia died in 1776 at the age of 83, and her grand empire was split up into 5 as proposed by a plan Valencia had before she had died. Going by her 30 list of orders that she wanted done after she died, the new Empress, Valencia III, daughter of Valencia II whom governed Tallahassee while her mother was on her campaigns, has raised to the throne of whats now known as the Kingdom of New Archosaur. Born when Valencia II was only 12 years of age,

Valencia III had rise to the throne at the age of 35 on the same year that Valencia I died. Valencia III was very inexperienced in political life, and lost many of the former Tallahassian Territories. Though, thanks to a ring of advisors and intelligent military generals, Valencia III managed to learn more about defensive warfare, and read war books that were written by her grandmother years before. Valencia managed to live to be 144 years old, making her the oldest person alive from 1-1999. Valencia III died in 1885 with out living her daughter and granddaughter, Valencia IV and Valencia V.

Over the course of the years, the Ishtamaris had increased in power. Under the rule of Valencia VII in 1914, she enlisted New Archosaur to join World War I on the side of the Allies to assist and keep their new alliances with France and Spain, but mostly Spain due to naming one of their 3rd most largest cities after her mother.

In 1929, New Archosaur greatly helped the people in the Great Depression with sending funds to the unemployed. Over 56% of the population had got back to work. In 1939, during World War II, a Communist general named Yurik Laederhorne has rise to power within the military, and challenged the Emperor, Waverly Ishtamari, to prove whos a better leader.

The Emperor retreated to the north, and Yurik became the new leader of the Military Junta in New Archosaur. After this had happened, it had split into two countries, the Republic of North New Archosaur and the Union of Southern New Archosaurian Socialist Republics, and creation of the "Wall of Separation", popularly called the "Wall of Death". The North prospered, while the South suffered under massive unemployment and lack of food.

In 2003, Anna Idushvine, a 19 year old politician, lawyer and supreme nationalist was elected. Under her leadership, the country boomed in prosperity. Previously, the National Freedom House rated South New Archosaur 7 (1 being the most free, and 7 being the least amount of freedom), and put the status "Not Free" on the country. It also had the world's most poorest economy.

Under Anna's leadership, it was reevaluated as 2, and the status "Generally Free", and the economy was re-rated to the 4th most richest economy. She was also responsible in ending the separation of the North and the South by signing the "Reunification Treaty" on February 14th, 2011. After receiving a hug from the Emperor of North New Archosaur, Boris Ishtamari, the two countries became united once again.

During recent years, New Archosaur went through major change. Buildings had begun to grow taller, the center of the city which is still surrounded by walls became a landmark and outside of the main portion, it had became larger and futuristic-like. Though, cars still dominate the ground, but in the inner part of the city, they still use horses.

New Archosaur is a landlocked country within the region of Elizabeth. The stretch of the city spreads quite far, and runs along the Leshek'gedu River, which leads to the Seyudu'ele River which goes through several countries. It's a plain region surrounded by mountains which are some of the most largest on the Lynx Minor continent, and cliffs to the south with a natural cut within the ridge. The largest lake within New Archosaur is Strawburg Lake.

New Archosaur is a democratic monarchy, where it's mixed with a Democratic system and an Absolute Monarchy system.

The Supreme Emperor/Empress is the sole leader of the entire kingdom that rules both the state and the country, though, his power is limited due to the constitution of Tallahassee and the Bill of Valencia of 1701. The Supreme Emperor/Empress's laws goes through the King, then to the President then to the Head of Senate and the Senate before passing any edicts. The Supreme Empreror/Empress can remain the leader of the country as long as he/she wishes. The Elected Monarch (King and Queen) has less powers than the Supreme Emperor, and acts as the official leader of the New Archosaurian Country but not the state. Elected Monarchs can be elected every 60 years, and once they step down, they become Royal Citizens. They loose their powers as a monarch, but they still have their rights and basic rights. The President has less powers than the Elected Monarch, and can only be in office for 6 years max, and acts as the official leader of the New Archosaurian State, which is only in New Archosaur's home country. They run only on two terms, and after they are up, become Private Citizens. Like the Elected Monarch, Presidents loose their powers but not their basic rights. They must be elected from the Senate. The Head of Senate is the body that leads the Senate House and runs the New Archosaurian Senate. The Head of Senate passes through the laws that the other three bodies propose or orders. They have the power to approve or disapprove. Though, if it's a severe emergency (They check always), the senate will automatically approve without going through it. The Head of Senate leads a total of 48 people, 16 for each popularly voted party.

The Senate houses 48 people, and 16 for each Party. Election takes place every 7 years, though after the 14th of February and the merge of the Northern and Southern New Archosaurians and the addition of the Comminust Party, Anna Idushvine made an exception and was elected instantly after the merge. The four current parties as of Febuary 14th is the Comminust Party, the Democratic Party, the Liberalist Party and the Monarchist Party. The leader who wins the elections first becomes the Head of Senate. Currently, the head of the senate is Anna Idushvine of the Communist Party.

New Archosaurian culture is usually centered around Music, Art, Liteurature and Food. Being poetic people and master writers, many great stories such as Immortal Kingdom (a book based on a historically romanticized version of the histories of Salamis, Menganis and Valencia) which sold nearly 300 million coppies. Art is also heavily appreciated, especially abstract, insanst and background. New Archosaurian music is primairly rock, techno and tribal. Sometimes, tribal is mixed with techno and rock to create a new type of music called "Taeke'nete" or "Tribalic Techno".

New Archosaurians have a unique religion known as Hiy'murmunism, which is centered around the Sea Goddess, Hiy'murmun. It includes God and Satan which are from the original Christan Bible. Hiy'murmunism uses the foundations of Taoism and is generally a peaceful religion due to it not being forced to others. The Christianity came from Salamis' armies, but was strongly discouraged due to it's violent history. Many people claims New Archosaur as a Christan Nation, but many New Archosaurians deny this due to Hiy'murmunism and Christianity being rival religions, and conflicts usually start.

Other than that, New Archosaurians accept the right to worship whomever they wish, since they say that their god, Hiy'murmun will always smile upon the person, even if they worship someone else.

Islam and Judaism is almost or nearly non-existent in New Archosaur due to it being so far away from their respective holy cities (Jerusalem and Mecca), and therefore, barely practiced despite New Archosaurians welcoming it and building mosques and temples in the city. 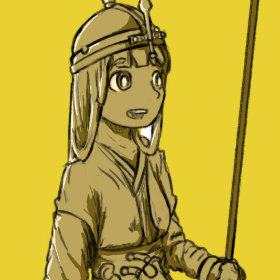