New Alexandria (Aquitanian: Neue Alexandrien) (Bennish: Niuvk Alzandraen) is the largest city in the Grand Duchy of Alexandria, it is also the second most populated urban conglomeration in Aquitania, it serves as the centre of government and seat to the Alexandrian Grand Duke. The city sits on the mouth of the Lexus River on the Alexandrian Bay. Being 500 kilometres from the city of Arcadia, Alexandria is the easternmost port of call in the country. With a metropolitan population of 9.3 Million, it is the most populated city in both the eastern aquitanian seaboard and the Eastern Mainland. In the year 3238, the city was chosen as White Giant's Council of Centau HQ, which has its central Headquarters in Celestial City.

New Alexandria was founded in the year 11000BCE and has been a vital port for generations, but has always been behind other major coastal cities in the west, like Arcadia, Awariss, Königsberg, Preutterdam and Savoy. Recently it has surged in importance, superceding Arcadia and Awariss in the year 2930 in both population and cargo tonnage that went through its port customs.

The History of New Alexandria is vast and dates to a millennium after the establishment of the Great Kingdoms, around the year 11000BCE.

The region where New Alexandria is located is a strategic and food rich area referred to as the Alexandrian Basin, which was the subject of military disputes between the Aq'Uhitann Kingdom and the Wu' Baheigh Monarchy to the south. As a result, the establishment originally called Ko'hostaack, and others in the region did not flourish until Aq'Uhitannii conquest of the region, approximately a millennium later, around 10000BCE. The settlement was renamed Ee'steek and gradually gained heavy importance with the Aq'Uhitannii rise to power. The settlement was elevated to the status of S'aaht (City) around 9000BCE by the Aquitanii Imperium and received enourmous benefits from the elevation, including its connection to Vanashel (Arcadia) via an Elevated Highway in the mid 7000'sBCE. Given the city's strategic location in respect to the Imperium's Extention in Auriga, the City from 6000BCE onwards was the primary port for domestic cargo and migration in the Nassau Sea. Such cargo and travel turned the city into a major stop in the Imperium's G'ahld Strohm (Gold Road), which traversed Northeast from the outer Aquitanii provinces to Auriga and beyond, importing rare spices and foods, like the Olive, which was highly prized. The result was a very wealthy city, second only to Vanashel in influence, it would play a significant role in the Millennia of Glory starting around 4000BCE.

By the start of the 2000 years of Glory, anyone wishing to travel to the rest of the Imperium by sea travelled, as if by tradition, to Ee'steek S'aaht (the City of Ee'steek). It became the icon of sea transport success within the Imperium, just as Waelffb'ahn was the symbol of travel by road. The grand markets of Ee'steek teemed with oriental and northern rarities, imported directly from the outer provinces or beyond the Imperium and Continent itself. Among the riches were large amounts of Olive Oil, which originated from the pre-Ruthenian peninsula through maritime trade with the local cultures. By 2500BCE, the city had an estimated 1,100,000 inhabitants, the second highest in the Imperium. The city was wealthy indeed, but was just as chaotic and gigantic as Vanashel, having carriage traffic that surpassed today's vehicular traffic in the city. 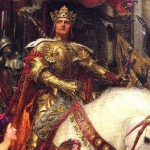