Chukyo (Standard Gaian: 中京, "middle capital") is the capital of the Gaia. The city is the largest city in the country and is the political, cultural and economic heart of Gaia. The city was built during the Expansion Era, after the passing of the National Capital Act. As part of the Act, the city is exclusively under the jurisdiction of the central government and is not part of any prefecture. Chukyo has approximately 5 million inhabitants, making it one of the most populous cities in the country.

Aside from being center of government, Chukyo is home to various corporations and is known for its great shopping atmosphere. One of the country's largest shopping centres is situated in the city. Shinonome Mall, which bares the name of the country's leading software and electronics manufacturer, has thousands of shops many of which sell electronics. The mall is also a major transit hub for the city as it intersects many rapid transit lines, and rail lines. The mall also serves as a dividing point between the densely built up downtown area and the rest of the city.

Prior to 3687, Chukyo was known abroad officially as "Celestial City". In 3687, it was changed to Chukyo (chu "middle", kyo "capital") when the central government began to pursue changes in language policy. Residents of Chukyo have been referring the city as Chukyo, for many decades prior to the renaming.

The city was built during the Expansion Era as part of the National Capital Act, which mandated the construction of a new capital for the country. After the signing of the Sora Agreement, the new government was tasked with finding a suitable site for the country's new capital. After months of surveying the regions east of Sora, the Gaian Colonial Authority submitted a list of suitable sites for the new capital to the Emperor and his government. The site on the northwestern shores of what is now Chukyo Bay was eventually chosen.

On March 16th, 3022, the city was officially founded and construction began shortly afterwards. Groundwork for the construction of the city began with the clearing of approximately 25km² of land adjacent to Chukyo Bay. By mid-November the highway linking Chukyo and Sora was complete.

By the 3050's the city had grown to nearly double its previous size, with the population steady rising as the city and national government expanded services and approved of new infrastructure projects. By early 3060, the superhighways N-1 and N-2 reach Chukyo, and greatly increase the city's economic prospects.

The city was formally renamed from Celestial City to Chukyo in 3687, following changes in language policy.

Parts of the city were damaged in the 3895 Nadahama earthquake, but damage was fairly minor due to earthquake resistant buildings and infrastructure.

The architecture in Chukyo is largely influenced by the architects and city planners of the New Era and by the Imperial Family. As a planned city, all new buildings within the city boundaries must be approved by a committee of city planners and the Governor-Viceroy. Various city bylaws prevent buildings from reaching certain heights in certain areas within the city. As a result, many of the country's tallest buildings are located in other cities. The tallest structures within Chukyo are mostly located within the city's Financial District and the encompassing Midoru Ward. Buildings located near the Government Ward of the city are under the greatest scrutiny.

Much of the cityscape today is the result of the mass urban renewal projects of the New Era, which saw the city evolve into the beautiful sprawling metropolis of today. From the construction of wide boulevards to the creation of many city parks, numerous city beautification programs throughout the history of the city have contributed to the city's beauty. 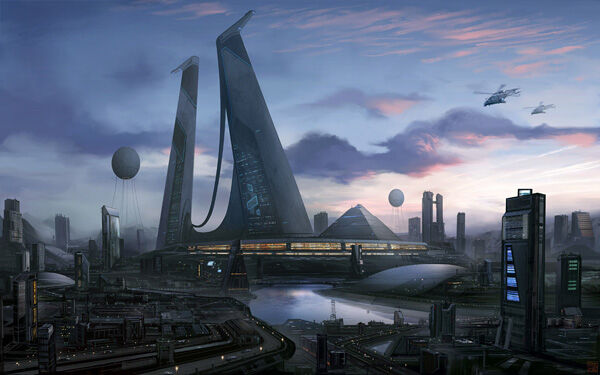 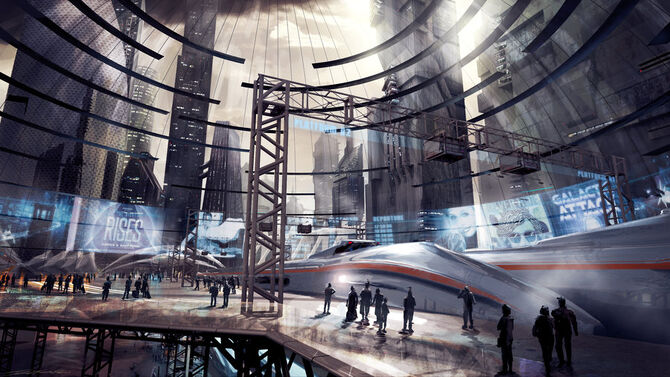 The climate in Chukyo is fairly mild and predictable. Summers are generally warm, while winters are generally cold and snowy. The city receives a fair amount of precipitation during spring, autumn and winter months. Sizable snowfall occurs during the winter months, sometimes culminating in blizzards. Other weather events to hit the city include seasonal storms.

Under the National Capital Act, Chukyo receives special oversight from the central government. It is the only city in the entire country governed by a Governor-Viceroy, who is appointed by the Empress. The Governor-Viceroy is not involved directly in the administrative affairs of the city, but is responsible for approving bylaws and projects within the city boundaries. The administrative head of the city is the mayor. Mayors are elected by the residents of the city, and are responsible for the daily operations of the city.

The city is divided up into 15 wards, all of which are roughly the same size. The residents of the city are able to elect two city councillors from their home ward. This means the Chukyo Metropolitan Government is comprised of 30 city councillors, which includes the mayor. The Governor-Viceroy holds the tie breaking vote. The metropolitan government has various departments created for the daily operations of the city, they include the Department of Public Works, and the Department of Utilities. The Chukyo Metropolitan Government Building serves as the headquarters for the governments of Chukyo and the Chukyo Capital Region.

A majority of government offices, excluding metropolitan government offices, are located in the city's Government Ward, which lies south of the Grand Canal. The ward is home to a significant number of offices belonging to the Gaian government and all of the foreign embassies located in Gaia. The ward is also home to the Imperial Parliamentary Complex, which is home to both houses of the Gaian Parliament. Recently, there has been an effort made by the central government to relocate some functions of the government elsewhere to cities such as Niihama and Mizuho in order to spread the economic benefits.

The city has been home to the headquarters of the Council of Centau, since its founding in 3550. The CC Headquarters complex houses many of the organizations offices and functions.

A significant percentage of Chukyo's inhabitants are employed by the Gaian government and corporations headquartered in the city. Residents of Chukyo enjoy one of the highest standards of living in the country and the lowest unemployment rates. The city is also an important business and financial hub, generating a fairly percentage of the country's GDP compared to other cities. Economic development remains steady in the Chukyo and the Chukyo Capital Region, as the city continues to be a desirable place for businesses and investment.

Many major Gaian corporations are headquartered in the city, including the tech giants, Shinonome Group and Ishimiya Technologies. Other notable companies with their headquarters in Chukyo, include the state-owned insurance company GaiaCare, and the state-owned Saito Development Corporation. Entities such as the Chukyo Stock Exchange and the Bank of Gaia have their headquarters located in the city's financial district.

The city also benefits economically, from its diverse retail landscape. Some of the country's largest shopping centres are located within the Chukyo Capital Region. Located on the shoreline of Chukyo Bay is Ohyo Outdoor Market, one of the regions largest markets, which offers a variety of retail products, produce, and seafood. The Hokari District features some of the city's trendiest shopping and entertainment venues. Venues such as the upscale Shinonome Mall are located within the area.

Tourism is a large contributor to the city's economy. Approximately 70% of tourists who enter the country, visit the city. Entertainment districts within the city, such as Hokari District, attract a large portion of tourists. The city is currently the focus of the country's latest tourism promotion campaign, "Go Gaia".

Chukyo being located in a very central part of the country, is a major hub for transportation. The city features one of the world's most advanced transportation systems. Much of the country's high speed rail network converges on Chukyo, at Nakaguchi Station and Chukyo Station. For citywide travel, the metropolitan government operates an extensive network of rapid transit lines and bus routes under its wholly owned entity known as Chukyo Metropolitan Transit or MetroTrans. All modes of transportation in Chukyo and the capital region accept the city's transportation pass known as the GoPass.

The Chukyo Metro is the city's comprehensive rapid transit system that connects each of the city's wards and the outlying areas of the Chukyo Capital Region. Chukyo Metro operates ten lines, with one in the planning phase. With well over a million passengers a day, the city has one of the busiest rapid transit systems in the world. For safety, all subway stations in the network are outfitted with screen doors to prevent access to the subway tracks.

Gaia Railways operates commuter lines and high speed rail lines that connects Chukyo with its surrounding region as well as all major cities in Gaia. Chukyo Station is the current hub for most of Gaia Railways rail services in Chukyo and western Mainland Gaia.

Takada International Airport, located in the southwestern fringes of the Chukyo Capital Region, is a major port of entry into Gaia and serves as a major hub for a number of Gaian aerospace corporations, such as Sora Airways, TransGaia, and Gaia Airlines. The airport is connected to the city by Line 4 of the Chukyo Metro as well as the Gaia Railways Chukyo Bay Line, and the Bayshore Expressway and Circular Route 3.

The most recent census has shown that 4,977,984 people live in Chukyo and approximately 6,500,000 live in the Chukyo Capital Region. A majority of the city's residents are Gaian, but due to the city being host to diplomatic missions, a sizable number of minorities exist, including people from Soviet member states, and Aquitania. These minorities make up approximately 3% of the city's population. The Gurobu Ward and Canghai Ward, which are largely residential areas, are some of the most populated and densely built-up wards within the city.

Chukyo has one of the best education systems in the country. All schools in the city, excluding post-secondary schools, are operated by the metropolitan government of Chukyo, through the Chukyo Department of Education.

Chukyo hosts a large number of post-secondary institutions, many of which are located in the city's suburbs. Notable schools include the University of Chukyo, Choetsu Institute of Technology, and Fujou International Academy.

The city also hosts numerous festivals and cultural events throughout the year. Major festivities include the Night of the Stars Festival, Gaia Day celebrations and the Winter Solstice Festival. During the summer months the city is host to the Chukyo International Fireworks Festival, which lights up the city skies from Chukyo Bay.

In 3537, Chukyo became the first city in the country to enter international sister cities arrangements.